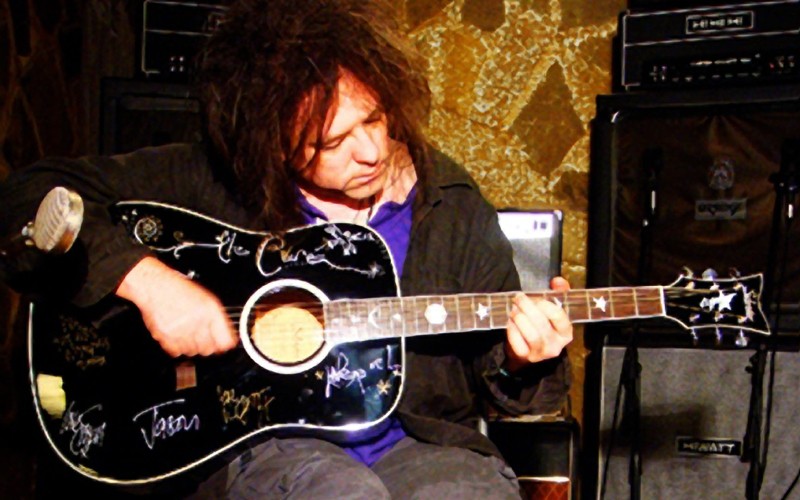 The Cure Donate Guitar to Aid in Inmate?s Defense Fund

This special guitar was not only designed to lead singer and guitarist Robert Smith?s specifications?maple body with spruce top, maple and rosewood neck and specially designed white pearl moon and star inlays?but it was also used in the studio by the musician this year.

The guitar is signed by all four-band members?Robert, Simon Gallup (bass), Jason Cooper (drums), and Porl Thompson (guitar); and features a unique Cure logo drawn by Thompson, who is responsible for the majority of the band?s artwork down the years. It also includes a ?Free the West Memphis Three? message written by Smith.

The auction will last for 14 days?from December 11 (Echols?s birthday) to December 25?one day for each year the West Memphis Three have spent behind bars.

The starting bid for the instrument has been set at $999.

?It is my hope that through Skeleton Key Auctions, both funds and awareness will be raised about the travesty perpetrated on these three innocent men,? said Anje Vela, president of Music4Life. ?Cases like the West Memphis Three?s are a blemish to our justice system. No innocent man or woman should be left to rot in prison without recourse, just because they lack the financial resources for a fair fight. Skeleton Key Auctions is grateful for bands such as The Cure who have generously donated to this cause.?

For further information about the guitar and to place a bid, log on to www.thecure.com or www.skeletonkeyauctions.com