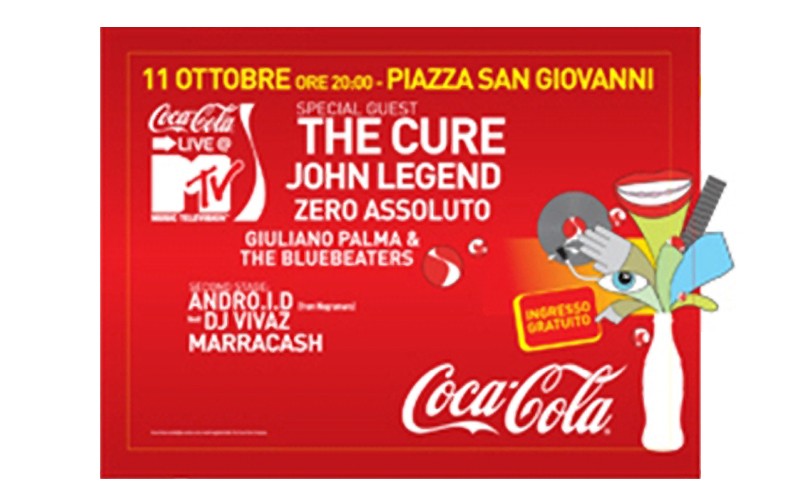 AND HERE IT IS

VIA THE MTV TRANSALTION DEPARTMENT…

TO PERFORM AT COCA-COLA LIVE@MTV 2008

On air live on Mtv Italia

After five successful editions, Coca-Cola Live@Mtv, the most awaited Italian music event of 2008, comes back with the live music signed by Coca-Cola and Mtv Italia.

Coca-Cola Live@Mtv is the music project that brings the biggest Italian and International artists in Italy?s most beautiful places since 2003. Now, it returns to Rome with an exceptional free live concert, broadcasted live on Mtv Italia, that will embrace thousands people to give them the best live music and an unforgettable show with pop icons such as The Cure, John Legend and many more.

The event will be held in Piazza San Giovanni on Saturday October 11th at 6.30 pm. The historical and suggestive square will become a huge, kaleidoscopic stage full of colors, sounds, and special effects, ready to brighten The Cure?s and other artists live performances. Robert Smith?s band is Headlining with a special exclusive set consisting of their entire new album ?4:13 Dream? and followed by an encore of their big hits. This unique performance will be broadcast worldwide on Mtv.

ANYWAY
HOW ABOUT ANOTHER DREAM…
THAT ON THE BACK OF MY 9/9/2008 NEWS POST ABOUT THE MTV AWARDS ENOUGH OF YOU CLICKED AND WE MADE THE FINAL CUT?

HEY! WE COULD BE 'BEST HEADLINER' SAYS MTV! WORTH A VOTE?

IF NOT PERHAPS CAST ONE FOR JONAS BROTHERS OR LIL WAYNE AS 'BEST ACT EVER'?